National Day for Truth and Reconciliation

From Nuclear Zero to Global Peace?

From Nuclear Zero to Global Peace?

The role of the Rotarian Action Group for Peace in the quest for nuclear disarmament.

The end of nukes

The end of nukes

Momentum is growing to rid the world of nuclear weapons. The United States should join the effort.

Stepping up for Peace

On September 20th, Hon. Marilou McPhedran provided a statement in the Red Chamber identifying the efforts in Winnipeg by local civil society leaders.

Story of the 4-Way Test by Herbert J. Taylor

... we must develop in our organization something which our competitors would not have in equal amount. We decided it should be the character, dependability and service mindedness of our personnel ... "In right there is might" ...

How The 4-Way Test Was Crafted And Used Effectively

The United Nations and Rotary International

At the organization conference of the United Nations in San Francisco in 1945, the United States delegation invited Rotary International to appoint consultants.

The United Nations And Rotary International

And a direct link to the Online application can be found at the following link:

Any prospective applicants to contact David G. Newman, Q.C. or Ken Krebs or Nancy Morris if they want to identify a Rotary club in Winnipeg ( there are 7 ) or any of 47 Rotary Clubs Rotary District 5550 ( Manitoba, Saskatchewan and Northwestern Ontario) or in other parts of the world where they live to
support their application.

On September 28, 2016 in his Sol Kanee lecture at the University Centre, University of Manitoba, Dr. Oscar Arias shared some little known history of Canada's role in helping Dr. Arias facilitate the achievement of Peace in Central America in the 1980's. In his address Dr. Arias gave special credit to Canada and its then Prime Minister Brian Mulroney and Foreign Affairs Minister Joe Clark for being two of five world leaders to help persuade President Ronald Regan to stop supporting the Contras, rebels in Nicaragara and allow Central America achieve peace on their own without interference by the USA and the USSR. Watch the full lecture on Youtube to learn how he achieved peace.

The first Rotary Club to meet outside USA was the Rotary Club of Winnipeg in November, 1910. More than a century later, Winnipeg again leads the way, this time with the Rotary World Peace effort.

When Israel Asper articulated his vision for aCanadian Museum for Human Rights in Winnipeg, it inspired Cam King and me, David G. Newman, Q.C., to champion the creation of Rotary International District 5550 World Peace PartnersCommittee in November of 2003.

The vision was to do it here, starting in Winnipeg, the heart of the Rotary District consisting of Manitoba, Saskatchewan and Northwestern Ontario; facilitating by example and inspiring Positive Peace communities worldwide through the actions of Rotarians in 35,000 clubs and 535 Districts around the world.

For the last 12 years this has been the work of Rotary World Peace Partners. Much progress has been made.

Winnipeg is now identified by a growing number of Rotarians internationally as a leading example of how to build a peace community.

Rotary World Peace Partners has been represented at numerous Rotary meetings locally, regionally and internationally to present on the activities emerging from Winnipeg. The Recent Rotary Peace Conference 2016 in Ontario, CA, was another of those opportunities as it was in perfect alignment with aspirations articulated locally.

The stories to be published in the days ahead on CNC are part of the process of advancing Positive Peace in Winnipeg. They are inspired by the organizers and presenters to this peace conference that my Rotarian wife and I attended. They were meant to be shared in Winnipeg, the heart of the continent and the home of the CMHR.

Read the full article by clicking on the following link:
http://www.communitynewscommons.org/our-city/winnipeg-positioned-to-inspire-positive-peace-worldwide/

Peace in Canada rests on reconciliation

Speaking to a workshop of about 30 Rotarians, and in the presence of Native American speakers also presenting, Chief Stacey LaForme of the Mississaugas of the New Credit First Nation in Ontario uses poetry he has written and his historical narrative to convey with great power the impacts of  assimilation and residential schools, racism and misunderstanding of Indigenous Peoples in Canada.

Read the full article by clicking on the following link:
http://www.communitynewscommons.org/our-neighbourhoods/peace-in-canada-rests-on-reconciliation/

Trust Manomombe, leader of National Peace Trust in Harare, Zimbabwe, reported to several hundred Rotarians attending a Rotarian Action Group for Peace workshop that the National Peace Trust is beginning to ready Zimbabwe for the post Mugabe regime. Robert Mugabe has served as the post-colonial dictator for 35 years. He is now 93 years old.

Their focus: where do we go from here?

They are adopting the Global Peace Indexdesigned and championed by Steve Killilea from Australia nine years ago. Positive Peace is defined by the index as attitudes, institutes and structures that create and sustain a peaceful society.

Read the full article by clicking on the following link:

This is one in a series of dispatches from David G. Newman, who attended the recent Rotary World Peace Conference 2016 in Ontario, California. These stories are inspired by the organizers and presenters to this peace conference and are posted by Mr. Newman on CNC as part of the process of advancing Positive Peace in Winnipeg.

“I realized my father was a murderer”

Dr. Bernd Wollschlaeger told an impactful story about freeing himself from the burden of having a highly decorated Nazi officer as his father, who never acknowledged the atrocities he was part of and glorified.

A raging alcoholic, his father would call those who did not agree with him, traitors.

When Bernd was 14 years old in 1972, the Munich Olympics changed his life. After Israeli athletes were massacred by several gunmen, the truth about the Jewish genocide perpetrated by the Nazis was discussed for the first time in his school.

Bernd’s father, Major Arthur Wollschlaeger, defended what he did and called the targets of genocide, “Riff raff from the east who had to be cleaned up.”

Read the full story by following the link:
http://www.communitynewscommons.org/our-city/politics/i-realized-my-father-was-a-murderer/

This is one in a series of dispatches from David G. Newman, who attended the recent Rotary World Peace Conference 2016 in Ontario, California. These stories are inspired by the organizers and presenters to this peace conference and are posted by Mr. Newman on CNC as part of the process of advancing Positive Peace in Winnipeg.

Can NHL Hockey and a Human Rights Museum Coexist in Winnipeg?
Information about the United Nations and the Importance of Dissemination of its Declaration

It followed the highly successful University of Winnipeg Global College course Emerging Issues in Human Rights and represents the next building block towards peace, compassion and service above self amongst youth. (Rotary youth member Quinn Ferris reflects on his experience attending the Emerging Issues in Human Rights course in this recent CNC article: Youth as the future of world peace).

Alongside the unveiling of the Rotary Adventures in Human Rights program, RAHR co-chair Irwin Kumka, embarked on a road show to Rotary Clubs in the district to garner support for the initiative.

Read the entire article at the following link:
http://www.communitynewscommons.org/our-neighbourhoods/rallying-local-business-to-support-rotary-adventures-in-human-rights/

For many students, September means not only back to school but getting to face some of their fears and challenges. Students from the River East Transcona School Division (RETSD) come from a very large and diverse population with various cultures being represented. Some of them tend to be isolated within their own culture while others come from a low socio-economic background. All of this can create negative effects such as racism, bullying and violence. In 2013, an exemplary art project was put in place to unite five schools within the RETSD – one elementary school, three junior high schools and one high school. Students worked with the guidance of Canadian Artist Alejandra Diaz Romain and Angel Audrey, art teacher. To read  more please follow this link and see the complete article: Art Education meets Human Rights

Creating conditions for peace to flourish

Carrie Hessler-Radelet, Director of the Peace Corps, shared many stories about the impact of this organization, now a strategic ally of Rotary International on a pilot basis.

Peace Corps operates in 60 countries with about 7000 volunteers who serve in other countries where they help create conditions for peace to flourish.

Alex Munoz, a female volunteer created a project to help local women working in a garbage dump in unsafe conditions. The women were ashamed of their jobs and worked at night in this toxic environment. They competed with each other.

Alex brought them together. They began to cooperate. They were taught they were recyclers doing meaningful work...

Read the full article by clicking on the following link:
http://www.communitynewscommons.org/our-city/economy-business/creating-conditions-for-peace-to-flourish/

Taking it upon himself to ‘just do it’

Bazzell Baz, a retired CIA field agent, founded a USA charity – the Association for Recovery of Children – when he chose to spend the rest of his life saving victims of child exploitation and human trafficking.

He told the audience of about 1,000 Rotarians and other peace builders that, “We all have one thing in common. We have 24 hours in a day. What are you doing with yours?”

2003 rescue of Lilly Snyder, kidnapped from U.S. and taken to Costa Rica.

As president of ARC, Baz recruits other retirees from the police, military and CIA to work with him in this volunteer effort of rescuing missing and exploited children whom authorities can’t find in the United States and in other parts of the world.

A Global Citizen’s Introduction to the CMHR 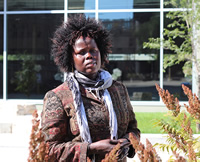 While Canada waits to catch a glimpse of what is inside its newest national museum, Rebecca Deng is already cherishing her experience previewing the Canadian Museum for Human Rights. Deng’s tour this summer was included as part of the Adventures in Global Citizenship course at The University of Winnipeg’s Global College. A portion of the course took place in the museum with CMHR experts acting as guest faculty.

“It really meant something, deep, deep inside for me, when I went in that museum,” says Deng, who, as a former child affected by war, one of the famed Lost Boys and Girls of South Sudan, knows about the importance of human rights.

It was the day violence first erupted near her home that a young Deng was separated from her father, a police chief. It would be 23 years before she would see him again. In the meantime, within two years of the separation, her mother passed away. Pausing to find the words to describe what happened after that, without even sisters or brothers at her side, she states “the situation was not okay,” and that she “grew up abandoned, wounded on the inside.”

Read the entire article by following the link:
http://news-centre.uwinnipeg.ca/all-posts/a-global-citizens-introduction-to-the-cmhr/