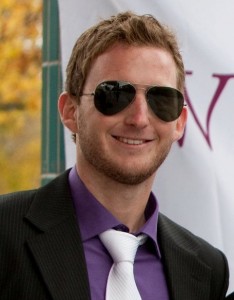 Leith is from the Gold Coast, Australia and now calls Winnipeg home.  He is a lawyer with Pitblado Law, having been called to the Manitoba Bar in 2012.  Leith practices mainly in the area of corporate commercial.

Leith is a volunteer with World Peace Partners, and began his involvement with Rotary International as an exchange student to Washington in 2002.  His other current commitments include Model United Nations Assembly and Music for Peace, which he kicked off in 2010 at The Forks with Winnipeg’s inaugural International Day of Peace celebrations.

Leith holds a BA (Journalism) and a LLB (Hons) from Griffith University in Australia.  In 2008 he studied human rights in Denmark, focusing mainly on the United Nations human rights system.  Aside from his legal practice, Leith is acutely interested in international law and diplomacy.

Leith grew up in Durban, South Africa, and immigrated to Australia at age 10.  He has lived on four continents and hopes to further both his international experience and commitment to peace initiatives here in Winnipeg.

Leith can be contacted at robertson@pitblado.com